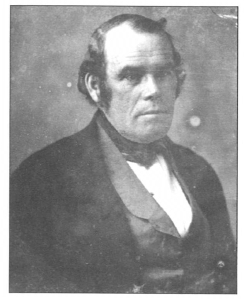 Mormonism Unveiled—Truth Vindicated, by Parley P. Pratt, pp. 14-15; “Now, Mr. Sunderland…. I will state as a prophesy, that there will not be an unbelieving Gentile upon this continent 50 years hence; and if they are not greatly scourged, and in a great measure overthrown, within five or ten years from this date, then the Book of Mormon will have proved itself false.” – Parley Parker Pratt, 1838

Matthew 10:28; “And fear not them which kill the body, but are not able to kill the soul: but rather fear him which is able to destroy both soul and body in hell.”

Parley Parker Pratt was the Church’s equivalent of a Christian itinerant preacher. He’d travel by horseback to countless towns, and cities, preaching the Mormon gospel wherever he went. His insatiable drive to see the land filled with polygamous Mormons knew no bounds, and his lack of moral integrity proved to be the death of him when he converted a married housewife by the name of Eleanor McLean. Her husband chased him down, and shot and killed him somewhere near Arkansas.

Before his untimely death at the age of fifty, he spent a fair amount of time writing books, and pamphlets denouncing all non-Mormons. The annihilation threats he made to the public at large was legendary at the time. Somehow, with no surprise, many of those ‘prophetic utterances’ didn’t make it into the Church’s history books. Today’s reference is one of those.

This tract was reprinted in the book ‘Writings of Parley P. Pratt’, and you can also read it in the link provided at the beginning of this article.

With all the historical data aside, Pratt’s prophecy was nothing but a ruse to scare people. His 1838 prophecy proved two things. 1.He was a false prophet. 2.The BoM is a false gospel.

BTW – Pratt’s prophecy is one of the reasons Mormons had a bad reputation that’s carried on throughout its history. People today might not know the real history of Mormonism, however, the underlying current of mistrust towards the Church still lingers today amongst non-Mormons.