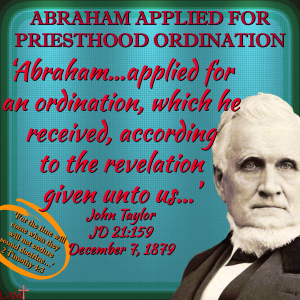 Journal of Discourses 21:159 “It was this priesthood that would be the means of introducing him into the presence of God that Abraham found that he was a rightful inheritor of, according to his lineage and descent, and he applied for an ordination, which he received, according to the revelation given unto us, and with that ordination the powers, the blessings, the light, intelligence and revelation associated with the Gospel of the Son of God.” – John Taylor, 14th Ward Meetinghouse, December 7, 1879

Genesis 12:7 “And the LORD appeared unto Abram, and said, Unto thy seed will I give this land: and there builded he an altar unto the LORD, who appeared unto him.”

1.God introduced Himself to Abraham first, not the other way around.

2.Where did Abraham get the paperwork to ‘apply’ for an ordination?

3.Who would’ve given him the paperwork?

4.Where in the Bible does this ever happen?

5.The priesthood didn’t come into effect until the days of Aaron which was about 500 years after Abraham.

Be sure to ask Mormons about this! Mr. Taylor gave this talk 139 years ago, but their doctrines still reflect the same message.

First and foremost, however, please pray!