We receive countless e-mails and phone calls on a daily basis asking us how to witness to a friend or loved one in Mormonism.  While I’ve numbered the tips below for witnessing it doesn’t necessarily mean they’re in order of importance.

However, it is important is to remember that everything I’ve listed for tips on how to witness will be a totally new experience to the Mormon.  When I converted to Christianity I was a few months shy of my thirtieth birthday, and quickly learned every single thing I had known up until that time was a lie.

Our new and updated version of ‘How to Witness to a Mormon’ is a result of PowerPoint presentations I’ve given at churches.

The majority of the points in ‘Witnessing’  are actually a result of copious note taking while listening to, and watching dozens of audio, and video tapes Dr. Walter Martin (1928-1969) produced during his long, and industrious career.

One comment he made always gives me pause, and has reminded me on a number of occasions to be dilegent in witnessing to those who don’t know our Lord.

‘The cults are the unpaid bills of the body of Christ’.

We’re listing the same first 12 points from our presentations, and 20 helps for friends and loved ones, thereafter. 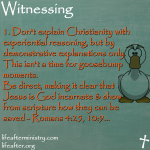 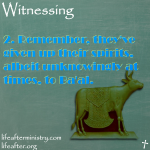 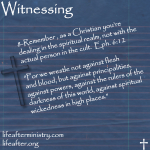 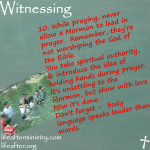 20 Helps for Mormon Friends and Loved Ones

1 – Word studies.  See if your Mormon friends would be interested in doing a word study with you!  These are great for the new ex-Mormon, as well as for the Mormon.  Just pick your favorite word/topic from the Bible, find all the places in the Bible where this word is used to get the full context, and share with each other what you’ve learned.  Make sure you both use a reputable concordance, and dictionary.  Also, let them know their opinion counts, that what they have to say matters to you personally.  You don’t have to agree with their opinion, but their spiritual condition obviously matters to you, or you wouldn’t bother trying.

2 – Go out of your way to share with the Mormon what Jesus did for you today.  Use scripture to back it up.  Show them how you applied that scripture to make it a personal message from the Lord, to you.  Teach them how to read the Bible as a personal letter from God, to them personally.

3 – Invite them to non-threatening events at your church, i.e. women’s teas, men’s breakfasts, dessert theaters, etc. Let them be around Christian ‘things’ as much as possible, i.e., the cross, Bibles that usually lay around churches, actual people inside the church building, in the daytime if possible during the week, etc.

4 – Listen to Christian music while they’re around you so they can hear the words.  Most Christian hymns, and songs contain scripture.  Isaiah 55:11 says His words will not return void.

5 – Have your Bible open to various passages of scripture when they visit.

6 – Make sure you’re the one that does the praying if the occasion arises, and grab their hand to hold it during prayer.  Never fold your arms while praying with a Mormon, and don’t allow them to do the praying.  They are not praying to the true God of the Bible, therefore this isn’t something you’d want to submit yourself to either.

7 – Ask them various questions about their church.  As you know this may cause animosity at some point, but it does give them something to think about.  Ask why they have to store food when Jesus told us in the Bible not to worry about tomorrow because it has troubles of its own – Matthew 6:34.  Who is more credible to them personally – Joseph and the living prophet, or Jesus Christ; then ask why.

9 – Ask why they don’t have crosses in their homes or wear them in a necklace.  Ask how they feel about the cross, and share with them what the cross means to you personally.

10 – Ask them why God would need Satan to fulfill his plan for mankind. 2 Nephi 2:11; “For it must needs be, that there is an opposition in all things. If not so, my first-born in the wilderness, righteousness could not be brought to pass, neither wickedness, neither holiness nor misery, neither good nor bad…”

This is actually a basic tenet within Witchcraft.  Witchcraft believes there must be an equal balance in all things; good for bad and bad for good.  In other words, yin yang.

11 – Ask them why the book of Jacob says not to practice polygamy but the Doctrine and Covenants says it means exaltation in the Celestial Kingdom (their highest kingdom of heaven).  Jacob 2:24; D&C 132:4-7.

12 – Ask for their opinion about D&C 1:37 which says the commandments in that book are true and everything will be fulfilled.  Polygamy was outlawed in 1890.

D&C 138:58-59; “The dead who repent will be redeemed, through obedience to the ordinances of the house of God,  59 And after they have paid the penalty of their transgressions, and are washed clean, shall receive a reward according to their works, for they are heirs of salvation.”

14 – Ask what they think of the following information;

2 Nephi 9:9 describes Satan.  “…yea, to that being that who beguiled our first parents, who transformeth himself into an angel of light, and stirreth up the children of men unto secret combinations of murder and all manner of secret works of darkness”.

1976 Introductory page of Doctrine & Covenants describes Moroni.  “This took place in the early spring of 1820.  In September 1823, and at later times, Joseph Smith received visitations from Moroni, an angel of light, who revealed the resting place of the ancient record from which the Book of Mormon was afterward translated”.

Joseph Smith’s Testimony 1:47; “After this third visit, he again ascended into heaven as before, and I was again left to ponder on the strangeness of what I had just experienced when almost immediately after the heavenly messenger had ascended from me for the third time, the cock crowed …” (A note to the Christian:  the heavenly messenger Smith is talking about is Moroni, an angel of light.)

15 – Ask the Mormon why they have to be baptized at the age of 8 for the remission of sins, if they are considered to be without sin until then.

D&C 68:27; “And their children shall be baptized for the remission of their sins when eight years old, and receive the laying on of the hands.” Also see Moroni 8:9-13.

17 – Ask your Mormon loved one if they fully accept the Bible.  The answer to this question varies from person to person.  If there is some hesitation to full acceptance, ask why, and then offer help to investigate reliable sources outside the LDS Church to find out which scriptures have not been translated correctly.

18 – Ask the Mormon: “if you died tonight would you go to heaven?”  Most, if not all, will say they don’t know.  Share your favorite passages from the Bible on how you have assurance of salvation.

19 – Have you told your Mormon friend who Jesus is from the Bible?  Have you told them He is God incarnate & also prophesied about in the Old Testament 333 times?  Look for other interesting facts about the Bible to share.  These types of things are typically non-threatening.  If they say he is the god of this world show them 2 Cor. 4:4.

20 –Do a simple Bible study with them just on Isaiah chapter 53.  There are 48 prophecies of Jesus in that one chapter alone, and each has been fulfilled!  LDS doctrines teach some of these prophecies are about Joseph Smith.

1 Cor. 1:18; “For the preaching of the cross is to them that perish foolishness; but unto us which are saved it is the power of God.”