Comprehensive History of the Church, Vol.2, Ch.47, p.128;“This work is rich both in doctrine and in historical incidents. Of the latter the fact of the large influence (if not identity) of Egyptian religious ideas in Chaldea in the days of Abraham is established; the descent of the black race, Negro, from Cain, the first murderer; the preservation of that race through the flood by the wife of Ham–“Egyptus,” which in the Chaldean signifies “Egypt,” “which signifies that which is forbidden”–the descendants of “Egyptus” were cursed as pertaining to the priesthood–that is, they were barred from holding that divine power; the origin also of the Egyptians–these things, together with the account of Abraham migrating from Chaldea to Egypt, constitute the chief historical items that are contained in the book.”
Romans 16:17; “Now I beseech you, brethren, mark them which cause divisions and offences contrary to the doctrine which ye have learned; and avoid them.”

Wow…I could write books about this subject, but our objective today is to look at four statements Joseph Smith made about his scripture (Book of Abraham) from the text above, and compare it to what God says in His word. Oh, be still my heart…

Smith’s statements are in blue –

1.‘This work is rich both in doctrine and in historical incidents…’

Well, I can’t argue with them there. It’s rich all right, but historical? Not so much…

2. ‘…the descent of the black race, Negro, from Cain, the first murderer…’

And here we go. The Bible says God put a mark upon Cain, but it doesn’t say he turned him, or his descendants, black.

Genesis 4:11-12, 15; “And now art thou cursed from the earth, which hath opened her mouth to receive thy brother’s blood from thy hand; 12 When thou tillest the ground, it shall not henceforth yield unto thee her strength; a fugitive and a vagabond shalt thou be in the earth. 15 And the LORD said unto him, Therefore whosoever slayeth Cain, vengeance shall be taken on him sevenfold. And the LORD set a mark upon Cain, lest any finding him should kill him.”

The transliteration of names for Noah’s sons:

The map provided here is also from the Freeman Institute. It’s a great visual on where people migrated, and how nationalities came to be. It’s also a great witnessing tool to use with Mormons! 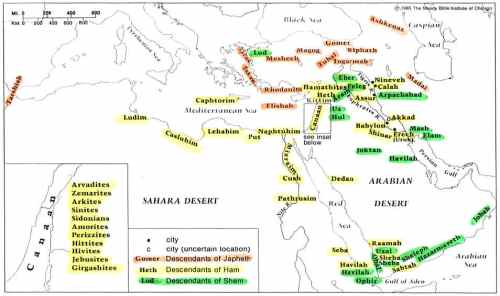 1st and oldest son of Noah

Psalm 105:23; “Israel also came into Egypt; and Jacob sojourned in the land of Ham.”

You’ll want to point out to the Mormon at this point in history, the priesthood still hadn’t been instituted yet.

2nd and middle son of Noah

3rd and youngest son of Noah

3. ‘…the preservation of that race through the flood by the wife of Ham–“Egyptus,” which in the Chaldean signifies “Egypt,” “which signifies that which is forbidden…”’

The Bible didn’t say anything about a woman named Egyptus.

The Bible doesn’t give info on the skin color of Noah’s daughters-in-law.

There’s nothing in the Bible indicating the word ‘Egyptus’ is the meaning of ‘Egypt’.

Let’s look at the word ‘Chaldean’ for a moment. This word is used interchangeably, and refers to either the Chaldean people, or Chaldea itself.

The Chaldean language is Semitic, and spoken by people in Mesopotamia located in the Mosul, and Kurdistan plains of northern Iraq.

“The term “Chaldaic,” for the language spoken by the Chaldeans, does not occur in the Bible. What has been popularly signified under that name is properly called “Aramean” in Dan. ii. 4. The Chaldeans of course spoke Babylonian in the days of the prophet Daniel; but when the Book of Daniel was composed (second century B.C.), Aramean had come to be used by all classes throughout Babylonia.”

Along this same vein…Egypt wasn’t a country before the flood, so how did Ham marry a black Egyptian when there was no such people group?

4. ‘…–the descendants of “Egyptus” were cursed as pertaining to the priesthood–that is, they were barred from holding that divine power…’

The Bible doesn’t say blacks were ‘barred’ from holding the priesthood.

God didn’t institute His priesthood until the days of Moses and his brother Aaron. This historical info negates Joseph Smith’s claims in the book of Abraham.

The Bible does say Ham’s son, Canaan, was cursed because of Ham’s sin of publicly exposing his father’s nakedness.

Genesis 9:18-19, 22, 25-27; “And the sons of Noah, that went forth of the ark, were Shem, and Ham, and Japheth: and Ham is the father of Canaan. 19 These are the three sons of Noah: and of them was the whole earth overspread. 22 And Ham, the father of Canaan, saw the nakedness of his father, and told his two brethren without. 25 And he said, Cursed be Canaan; a servant of servants shall he be unto his brethren. 26 And he said, Blessed be the LORD God of Shem; and Canaan shall be his servant. 27 God shall enlarge Japheth, and he shall dwell in the tents of Shem; and Canaan shall be his servant.”

As you can see, Smith twisted God’s precious, holy word into what he wanted it to say. While doing that he also convinced his followers the Bible couldn’t be trusted either. In the end they refused to open their bibles to verify Smith’s claims.