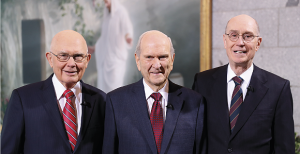 Stepping away from tradition by installing the residing counselors into the upper echelon of Mormonism, the new prophet, Russell Nelson, chose Henry Eyring, and Dallin Oaks, as his two counselors. Uchtdorf has been relegated to his former position in serving as one of the Church’s twelve apostles.

Here’s what the Church News announced from the temple today –

“Paying tribute to President Thomas S. Monson, who passed away January 2, President Nelson said that President Monson’s counselors, President Henry B. Eyring and President Dieter F. Uchtdorf, “have been totally capable, devoted, and inspired. … Each is willing to serve now where he is needed most.”

President Uchtdorf, who has resumed his place in the Quorum of the Twelve Apostles, “has already received major assignments for which he is uniquely qualified.””

Without saying so, it looks like Uchtdorf was demoted.

Their other big news came with the calling of M. Russell Ballard, 89, as the acting president of the Quorum of the Twelve Apostles.

The Church wasted no time in reminding people their policy about the children of LGBT’s will stand, as it was a ‘revelation’ from God, although that’s not how it was originally announced. It was explained several months after the fact their new policies came as a direct revelation from the Lord, and they all ‘felt peace’ when they discussed it.

When they were asked by a reporter why they had a lack of diversity in their hierarchy, Mr. Nelson replied by stating, ‘We are white, and we are American’. He reminded people to look at the leaders of the various communities, and stated those are the ‘real leaders’ of the Church. He also said,

‘I think we will live to see the day when there will be other flavors in the mix … but we respond [to callings] because we’ve been called by the Lord. Not one of us asked to be here.’

After all that, there’s one outstanding observation.

Aside from all the unbiblical hokey-pokey they employ to justify their position, the words Mr. Nelson chose to use speak more to his character and that of the Church, than anything else.

He said he thought they’d live to see the day when there would be ‘other flavors in the mix’. Say what they will, I, for one, don’t find being referred to as, ‘other flavors’, endearing.

Pray for the Mormons who heard this, and/or will read about it in their nightly newspapers. We’re asking Jesus to open their minds, and ask themselves if this is the type of God they want to worship.