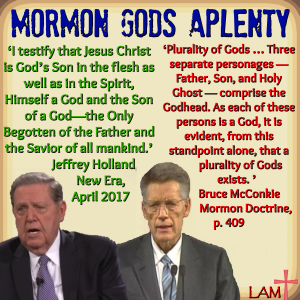 New Era, ‘Testify of the Restoration,’ April 2017;“I testify that Jesus Christ is God’s Son in the flesh as well as in the Spirit, Himself a God and the Son of a God—the Only Begotten of the Father and the Savior of all mankind.” – Jeffrey Holland [emp. mine]

Mormon Doctrine, p. 409;  “Plurality of Gods … Three separate personages — Father, Son, and Holy Ghost — comprise the Godhead. As each of these persons is a God, it is evident, from this standpoint alone, that a plurality of Gods exists. To us, speaking in the proper finite sense, these three are the only Gods we worship. But in addition there is an infinite number of holy personages, drawn from worlds without number, who have passed on to exaltation and are thus gods.” – Bruce R. McConkie [emp. mine]

Acts 17:23; “For as I passed by, and beheld your devotions, I found an altar with this inscription, TO THE UNKNOWN GOD. Whom therefore ye ignorantly worship,  him declare I unto you.”

While on his 2nd mission to Athens, the apostle Paul was invited by the Stoics to come explain the new God he was preaching about in the temple and in the streets.

Not missing a beat, Paul headed for Areopagus (Mars Hill) to present his argument of this God to the Greeks, who’d meet at a special council and discuss religious philosophies. As he walked down the entrance, statues lined both sides, each with a dedicatory plaque representing a different god.

As I read over this biblical passage again, I couldn’t help but think of Mormons. While Paul correctly jumped on the chance to introduce the true God of the Bible, we can’t help but wonder if Mormons ever think about the pantheon of gods in their own religion. To date, they don’t even know the name of their heavenly father’s father.

In this past General Conference (April 2018), we saw numerous speakers talk on the importance of doing genealogy, and the subsequent temple work for deceased relatives.

With all the baptisms, endowments, and perfunctory exercises they engage in, we’re praying they stop to wonder who all the gods are, and where they’re at today. The only difference between activities of the Stoics, Epicureans, and Mormons, is time. Each is a form of polytheism.

Be sure to share the info with the Mormon you know and ask what they think!