In 1837 George Watt became the first Mormon convert on the British Isles. His conversion to the Church came with a devotion that seemed absolute and he was handsomely rewarded with various high profile jobs within the Church. Serving in many capacities included moving to the States and back to his homeland as a church missionary, moving again (this time to Salt Lake), editing and recording Brigham Young’s sermons, publishing the Journal of Discourses and creating a new phonetic alphabet. The Church called their new language system the “Deseret Alphabet”. 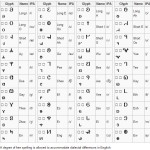 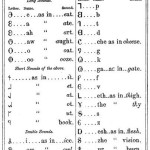 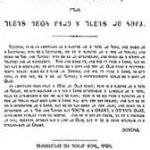 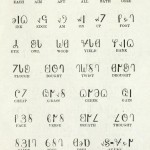 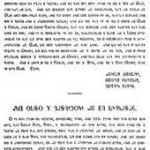 Ironically his unfettered devotion to the Church only went so far. In 1874 Watt was ex-communicated for following the teachings of another dissident by the name of William Godbe and eventually became one of the strongest leaders of the Godbeites.

After Young and the majority of Mormons had settled themselves into the Great Basin their farming, cities and fundamental necessities of living on the frontier were well underway to begin a new society where the Saints could live unmolested.

This scenario presented Brigham Young with a unique situation. Being the only mouthpiece for God there was no governmental interference, nor was there anyone he had to be accountable to. It afforded him the luxury of instituting new theologies and mandates at will where his autocratic ways couldn’t be tested.

In 1850 George Watt moved to Utah and with his stenography skills in place he began taking notes and recording Young’s sermons. Because of this Young also appointed him to a committee that had been set up to create the new alphabet.

By the time December of 1853 rolled around the committee formed at University of Deseret came up with and adopted a new alphabet.

They felt the new alphabet would be beneficial for a number of reasons and for every opinion there’s a different reason why Brigham wanted the new system instituted amongst the followers.

Some have surmised one of the reasons was to keep “yellow covered literature” (trashy novels) out of the hands of the youth. Still others thought it was a way to keep the Church’s teachings secret to the outside world.

Whatever the intent, it also meant that anything published by the Church wouldn’t be readable to outsiders and vice versa. The characters of the new alphabet didn’t resemble the English language, nor would it correspond with anything the outside world was familiar with.

For many in and out of the Church it was yet another way Young tried to control the people. In August 1868 Brigham is quoted as saying;

Discourses of Brigham Young, pg. 257; “I hope to see the time when we shall have a reformation in the orthography of the English language, among this people, for it is greatly needed. Such a reformation would be a great benefit, and would make the acquirement of an education much easier than at present. 12:174.”

While they deemed the Deseret Alphabet as completely original, there are still questions as to where they came up with the 38+ characters. Some have suggested they stem from the hieroglyphics of Reformed Egyptian found on the golden plates and some have suggested they’re taken from Ethiopian and other languages. No matter the origin, interest in the Deseret Alphabet waned over the next twenty-three years until it completely fizzled out and forgotten.

After dumping more than $20,000 for printing and distribution costs, any residual interest in developing or keeping it in the school systems went to the grave with Brigham Young in August 1877. Reasons for its demise are varied, but it met a fair amount of resistance from teachers who were already fighting to cram a lot of information into students’ heads in a short amount of time. School schedules ran on the growing seasons and not on the 180 day school year we know today.  If and when students showed up for school they were taught basic math and reading skills they could use when planting and selling crops in a language they were already familiar with.

Interest in the alphabet today is few and far between. You can read more about its history in a 1978 article from the Ensign as well as a short blurb about it in the Religious Educator published by BYU in 2006.

While the Church may not have been successful in their new alphabet, they certainly were with transforming the meaning of everyday English words. The terminology Mormons use even today is vastly different from that of anyone outside the realm of Mormonism.