Matthew 5:44 “But I say unto you, Love your enemies, bless them that curse you, do good to them that hate you, and pray for them which despitefully use you, and persecute you”. 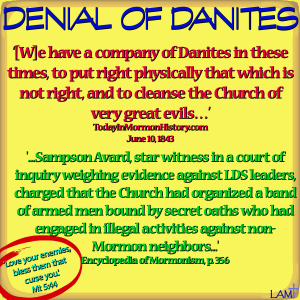 Joseph Smith was a busy guy, and had left a trail of evidence showing his activities were typically less than godly. Today’s post is about the events of when Smith and friends organized their vigilante crusade, and the Church’s subsequent denial any such thing existed.

Today we have the benefit of the Church’s own track record to see how they’ve denied this activity, just as Smith denied ever practicing polygamy.

Listed below are excerpts from both sides of this issue. For further info, links are provided to get you where you need to be.

One thing is absolutely certain.

Either Joe Smith lied in his journals the Church willingly published, or the Church has lied by denouncing historical facts.

Be sure to check out our article Mormon Danites v. Biblical Danites & find out why these two groups weren’t following the Lord.

TodayinMormonHistory.com “– 180 years ago today – Jun 10, 1838 — The “Danites” are organized during a clandestine meeting when Jared Carter, George W. Robinson, and Sampson Avard, “under the instruction of the [First] [P]residency, formed a secret military society, called the ‘daughter of Zion.’”

Avard instructs the newly inducted members: “As the Lord had raised up a prophet in these last days like unto Moses it shall be the duty of this band to obey him in all things, and whatever he requires you shall perform being ready to give up life and property for the advancement of the cause[.] When any thing is to be performed no member shall have the privilege of judging whether it would be right or wrong but shall engage in its accomplishment and trust God for the result[.]”

The next month Joseph Smith’s scribe writes in “The Scriptory Book of Joseph Smith, Jr.”: “[W]e have a company of Danites in these times, to put right physically that which is not right, and to cleanse the Church of verry great evils which hath hitherto existed among us inasmuch as they cannot be put to right by teachings & persuas[ions].” [Spelling as in original.]

“Following the violence in northwestern Missouri in 1838, the Mormon dissident Sampson Avard, star witness in a court of inquiry weighing evidence against LDS leaders, charged that the Church had organized a band of armed men bound by secret oaths who had engaged in illegal activities against non-Mormon neighbors (Document, pp. 97-108). With the 1841 publication of the court proceedings, Avard’s account became the foundation for all subsequent non-Mormon “Danite” accounts. Thus was born the legend of the Danites

Though no Danite organization was known in Nauvoo or in Utah, the stereotype persisted …

Contemporary records suggest something fundamentally different. In October 1838, Albert Perry Rockwood, an LDS resident of Far West, Missouri, wrote in his journal of a public Danite organization that involved the whole Latter-day Saint community. He described … the Danite organization encompassed the full range of activities of a covenant community that viewed itself as a restoration of ancient Israel. Working in groups, with some assigned to defense, others to securing provisions, and still others to constructing dwellings, these Danites served the interests of the whole. This was not the secret organization Avard spoke of; in fact, Rockwood’s letters to friends and family were even more descriptive than his journal (Jessee and Whittaker)….”