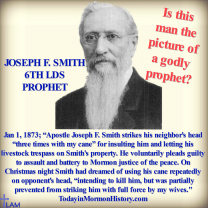 TodayinMormonHistory.com “145 years ago – Jan 1, 1873; “Apostle Joseph F. Smith strikes his neighbor’s head “three times with my cane” for insulting him and letting his livestock trespass on Smith’s property. He voluntarily pleads guilty to assault and battery to Mormon justice of the peace. On Christmas night Smith had dreamed of using his cane repeatedly on opponent’s head, “intending to kill him, but was partially prevented from striking him with full force by my wives.” – The Mormon Hierarchy – Extensions of Power by D. Michael Quinn, [New Mormon History database (http://bit.ly/NMHdatabase )]

Jeremiah 23:16; “Thus saith the Lord of hosts, Hearken not unto the words of the prophets that prophesy unto you: they make you vain:  they speak a vision of their own heart, and not out of the mouth of the Lord.”

The old adage, ‘the apple didn’t fall far from the tree’, is a fitting example of what happened in the Smith family. Mr. Joseph F. Smith was the son of Hyrum Smith, and nephew of Joseph Smith, Jr.

Eighteen years after Mr. Smith’s outburst, he was called to be the 7thprophet/president of the Church of Jesus Christ of Latter-day Saints, and served in that capacity until his death in November 1918. Unknown to most LDS members, Smith was ‘dubbed the fighting apostle’, for his unbending view of the Mormon gospel. He also had a reputation of a bad temper which only added to his title.

“A bishop then must be blameless, the husband of one wife, vigilant, sober, of good behaviour, given to hospitality, apt to teach; 3 Not given to wine, no striker, not greedy of filthy lucre; but patient, not a brawler, not covetous…”

According to the Apostle Paul, Smith failed the test on numerous levels. He was accused, and found guilty of assault, he didn’t show his neighbor any hospitality when his cattle wandered into Smith’s property. Neither of those qualify for good behavior.

He was a ‘striker’, which in the Greek means to flatten someone*, he wasn’t patient, it was shown he was a brawler, and by his own admission, he was the husband of more than one wife.

*plēktēs and plēssō are the transliterations for striker. They both mean to flatten someone out, to strike someone, pugnacious, et al.

For all intents and purposes, it also looks like his actions were premeditated if he dreamt about this scenario a week beforehand.

Today’s Mormon quote is a clear example of the character traits of those leading this church. Pray that members open their eyes to what’s going on, and make a decision to follow Jesus, not Joseph!