1 John 4:1 “Beloved, believe not every spirit, but try the spirits whether they are of God: because many false prophets are gone out into the world.” 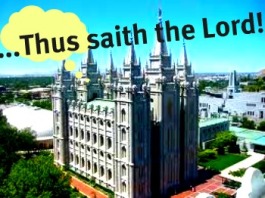 It’s well known the entire infrastructure of the LDS Church rests upon its claim of authority. According to their claims, the body of Christ fell into a complete apostasy upon the death of the last living apostle of Christ c. 100 AD. Therefore, God needed to enact ‘plan b’, to get his body of believers up and running once again.

Since the time of Joseph Smith, each leader has taken a turn at providing colorful descriptions of Christianity’s dismal state, and the need of a restoration. After all, if the Christians hadn’t fallen into such state of disarray, there’d be no need for Mormonism.

By and large, Mormons believe the resurrected disciples of Christ appeared to Joe Smith and Oliver Cowdery and bestowed the all important priesthood powers upon them. The one thing they’ve not been in agreement upon is how the Church was originally organized, and who played what part, when. Therein lies another problem.

Growing up I never questioned the men who said they held all the power to direct us as believers. However, after I became a Christian and began reading God’s word, I realized my grievous error in trusting Joe Smith and other leaders. In reality there is no priesthood in the manner they believe, and there is no authority but God.

Mormons refuse to believe they don’t hold the Melchizedek, or even the Aaronic Priesthood, rather, they believe these two things are what gives them authority to ordain, and govern their church because God reinstated it from biblical times.

While that in and of itself, is a major hurdle to overcome, it’s not the only issue they’re facing. As we stated in our first post with this series about rewriting their canon, and the activities of witchcraft, the Church can’t fix the problem they’ve created with this one. The reason why is because they’ve not told the same story twice, and what’s written in their canon is a classic case of retro-engineering what they missed the in the first go-round.

This time they’ve tried to retrofit the stories of John the Baptist, and apostles Peter, James, and John appearing to Smith and Cowdery to bestow the priesthood. Testimonies and affidavits from numerous members of the Church reveal they knew of no such event until years afterwards.

We’re listing a couple of examples here, and then providing the link to where many more are listed for you to have on hand for comparison. One thing is absolutely certain. If the early members, meaning those who were with Smith from the very beginning, didn’t know about any priesthood, doesn’t it stand to reason Smith made it up as he went along?

Be sure to share the info with the Mormon you know and ask for their opinion about it!

David Whitmer, one of the witnesses to the Book of Mormon, said,

William McLellin, stated, I joined the church in 1831. For years I never heard of John the Baptist ordaining Joseph and Oliver. I heard not of James, Peter, and John doing so.” Some time later he repeated that “I never heard of it in the church for years…” (An Insider’s View of Mormon Origins, pp.224-25).

An Address to All Believers in Christ David Whitmer