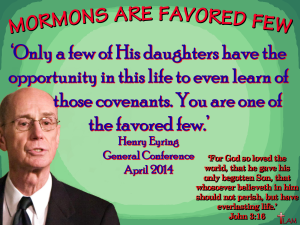 General Conference, ‘Daughters in the Covenant,’ April 2014;“It is our free choice whether we make and keep those covenants. Only a few of His daughters have the opportunity in this life to even learn of those covenants. You are one of the favored few. You dear sisters, each of you is a daughter in the covenant.” – Henry B Erying

John 3:16; “For God so loved the world, that he gave his only begotten Son, that whosoever believeth in him should not perish, but have everlasting life.”

I just love our scripture verse today. It’s simple, and to the point while giving us a picture of God’s heart. I’ve always thought of John 3:16 as the ABC’s of the Bible. Answering Bible Critics. You can use that one verse to answer a ton of questions!

There’s nothing you have to do to earn His love because He obviously already loves you. Yes, you!

There’s nothing you could do to make Him not love you because He doesn’t hate what He’s created. And yes, that means you!

Think about it. Who do you know that loves everyone? Do you qualify? I know I certainly don’t and I know for a fact I wouldn’t give up one of my kids for everyone.

Sadly the Mormon people have been led to believe they’re ‘chosen’ and the ‘favored few’, but reality speaks otherwise. Being Mormon doesn’t mean you’re a nationality. It’s more like a civics group; not a group based on genetics. Israel was God’s chosen people in OT times. In NT times Gentiles become part of the chosen group when they confess Jesus as their God and Savior.

Ephesians 2:14; “For he is our peace, who hath made both one, and hath broken down the middle wall of partition between us”.

So yes, God loves the world and He even loves the Mormons, but if you haven’t confessed Him as Lord you’re in trouble and most certainly will perish.