The lies and contradictions Russell Nelson made this past weekend were many. One thing that caught our attention was when he told members Jesus gave the Nephites specific instructions on what to name their church… 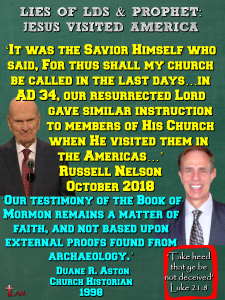 The Correct Name of the Church “It was the Savior Himself who said, “For thus shall my church be called in the last days, even The Church of Jesus Christ of Latter-day Saints. Even earlier, in AD 34, our resurrected Lord gave similar instruction to members of His Church when He visited them in the Americas. …Thus, the name of the Church is not negotiable.” –– Russell M. Nelson, October 7, 2018

2 Peter 3:17 “Ye therefore, beloved, seeing ye know these things before, beware lest ye also, being led away with the error of the wicked, fall from your own stedfastness.”

We’re wondering how could Nelson’s words be true? Several leaders of the LDS Church, including Nelson, have stated the BoM isn’t an historical book, rather, it’s a matter of faith, not fact. Here are a few examples of what we’ve gathered from official statements.

For more info on these, and similar statements, see LDS Leaders Who Admit Mormonism Isn’t True.

This man is a false prophet who stood at a podium, and preached a false gospel to millions of people around the world. Don’t believe the destructive heresies that he, or the other LDS teachers, have to offer! Nelson’s talk was permeated with repeated lies that most members won’t question.